This time I wanted to share a beautiful collection of glassware that I purchased at a recent estate sale. 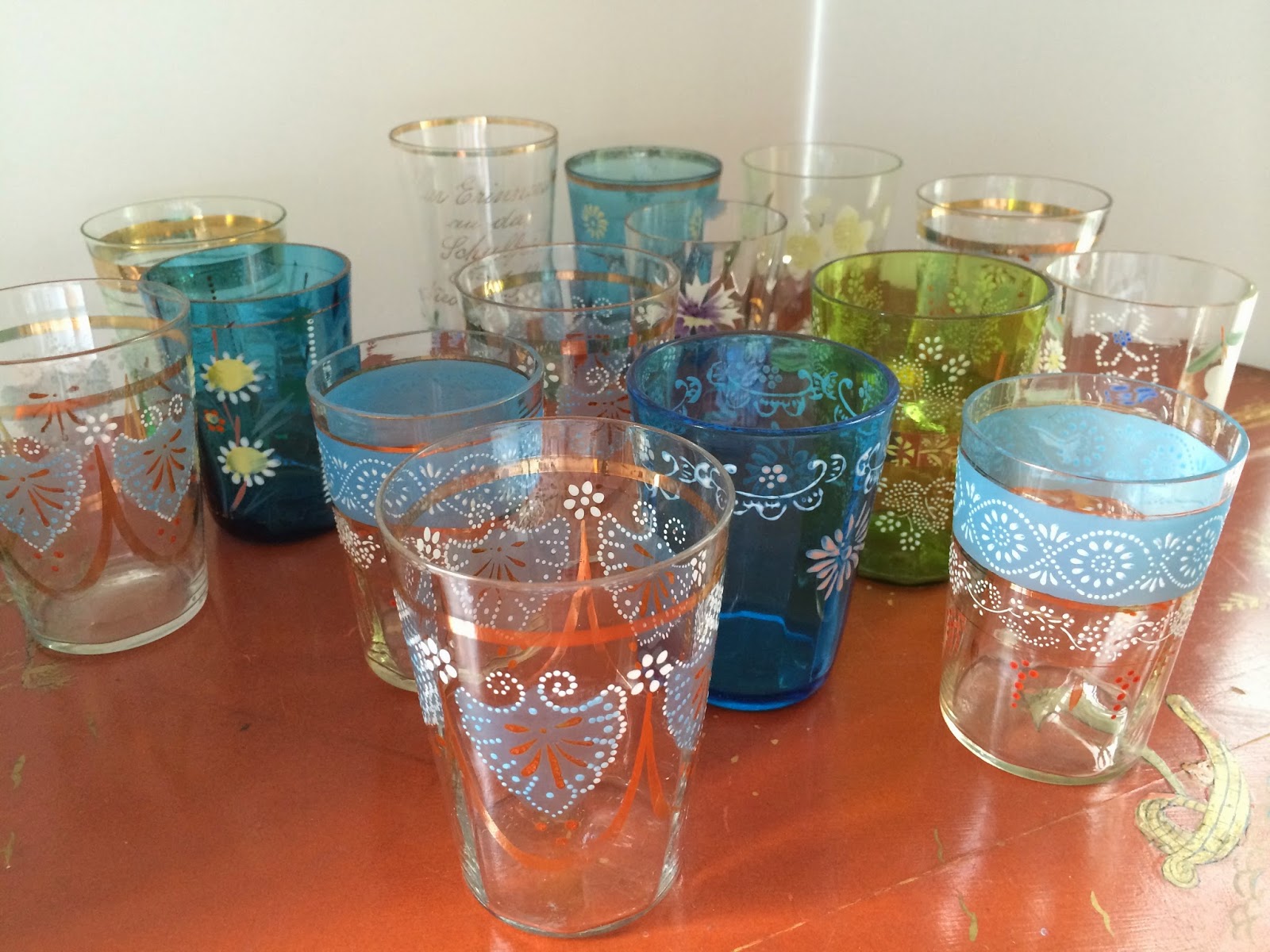 They caught my attention the minute I walked in the door. 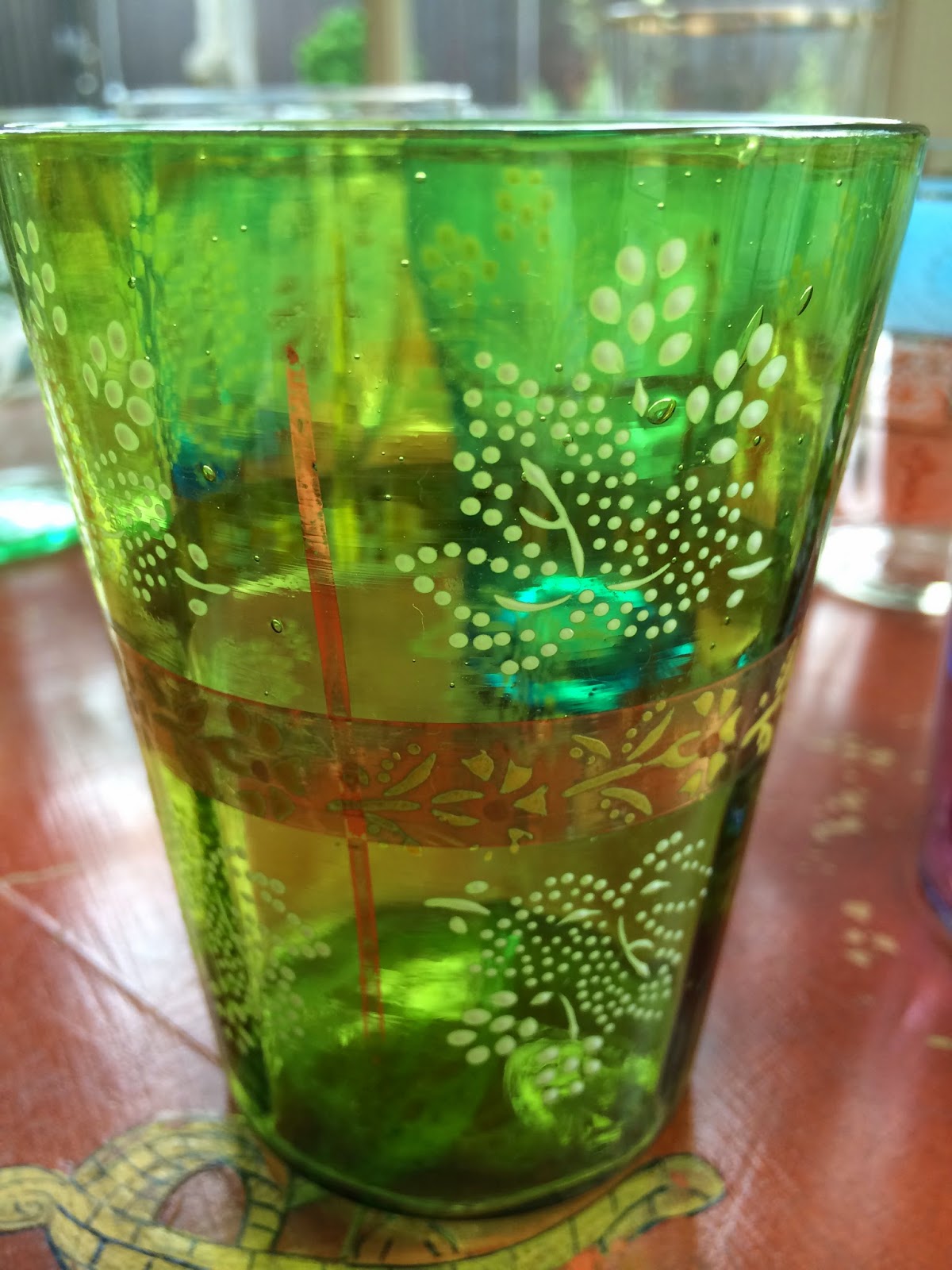 My first thought was, WOW, someone probably spent years collecting these and how fortunate I was to be able to acquire them all at one time! 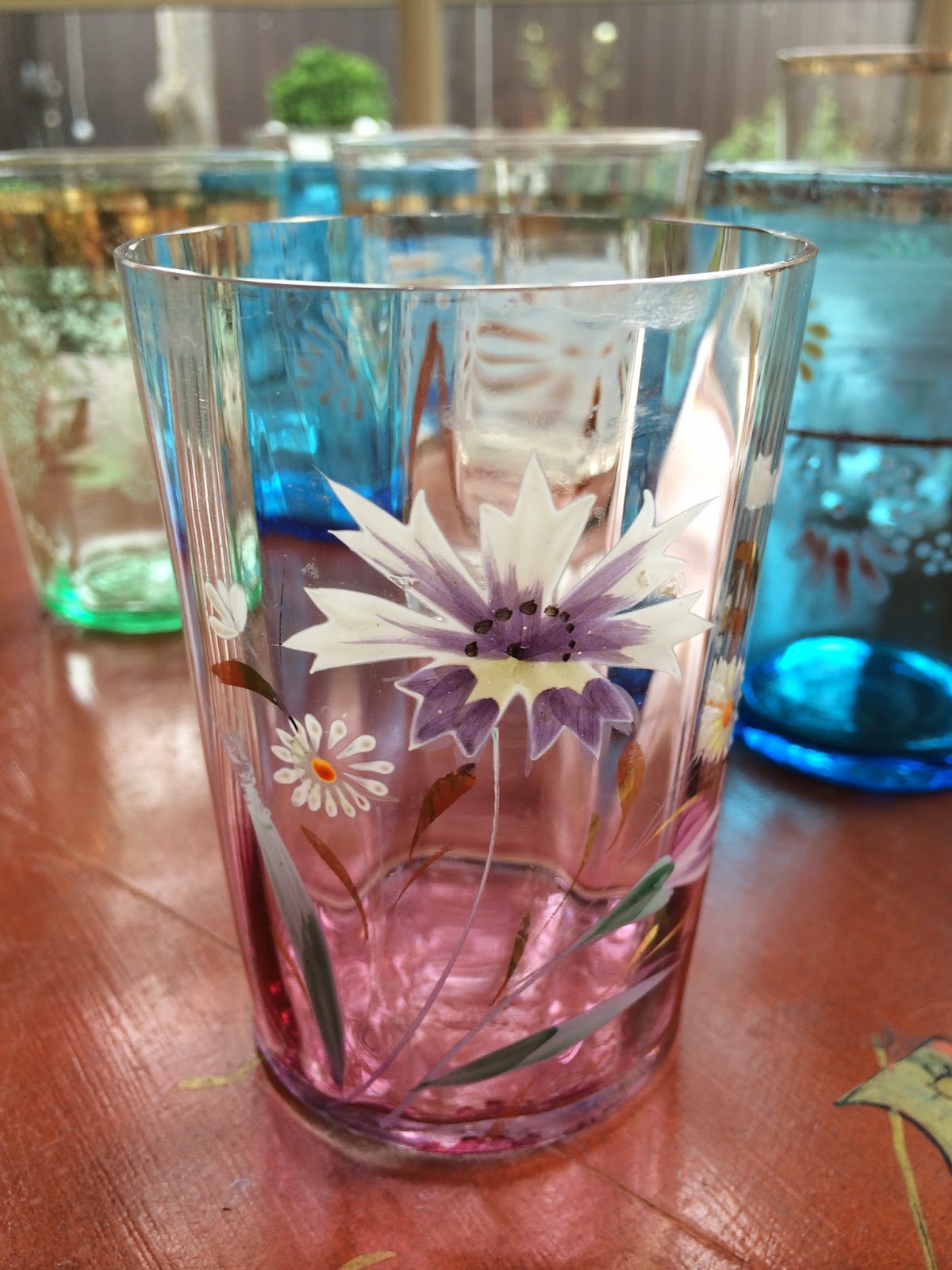 I carefully gathered them up and placed them underneath a table hoping they would remain safely hidden until it was my turn to pay. 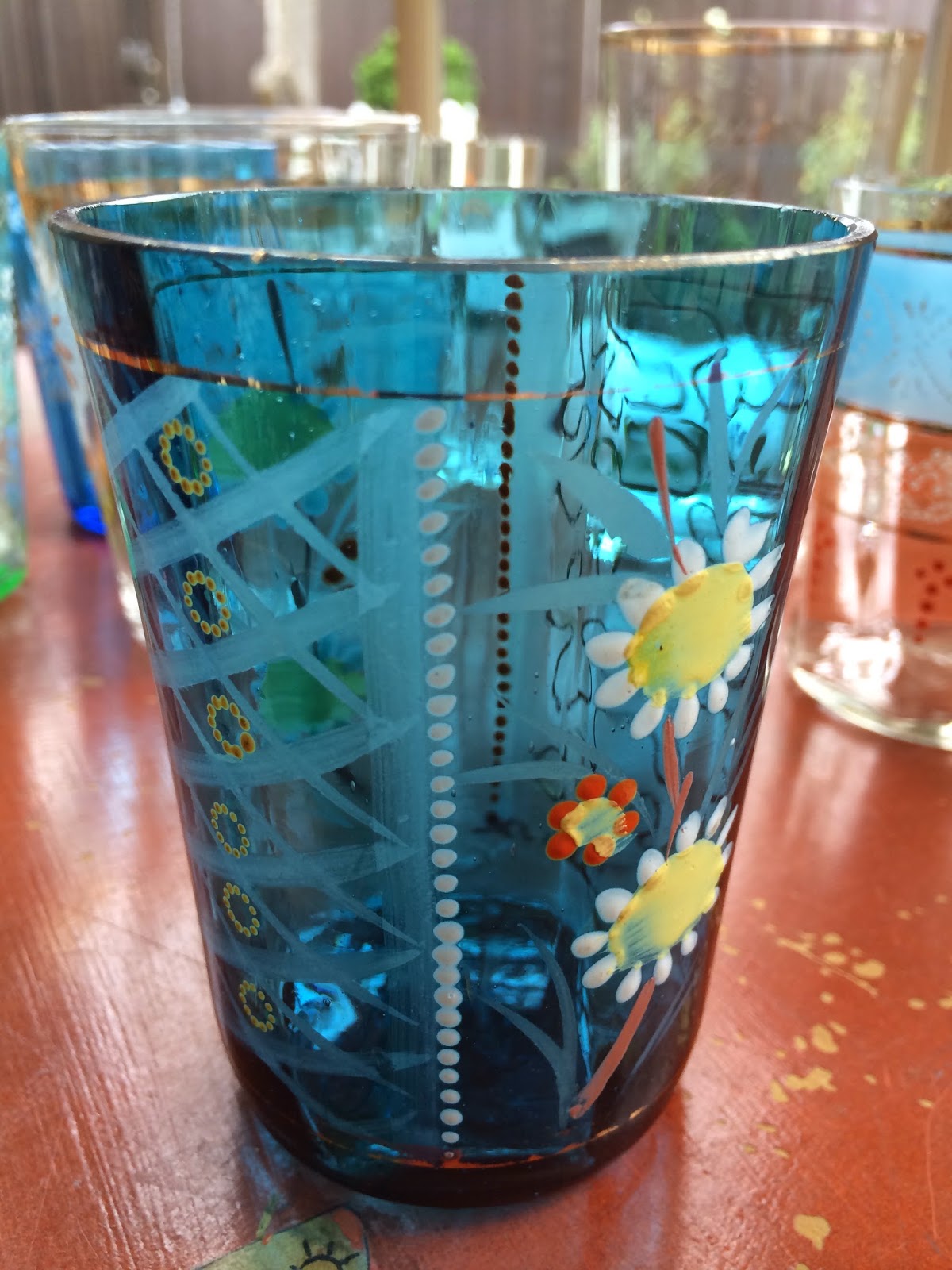 Fortunately they did and I was able to get them home safe and sound. 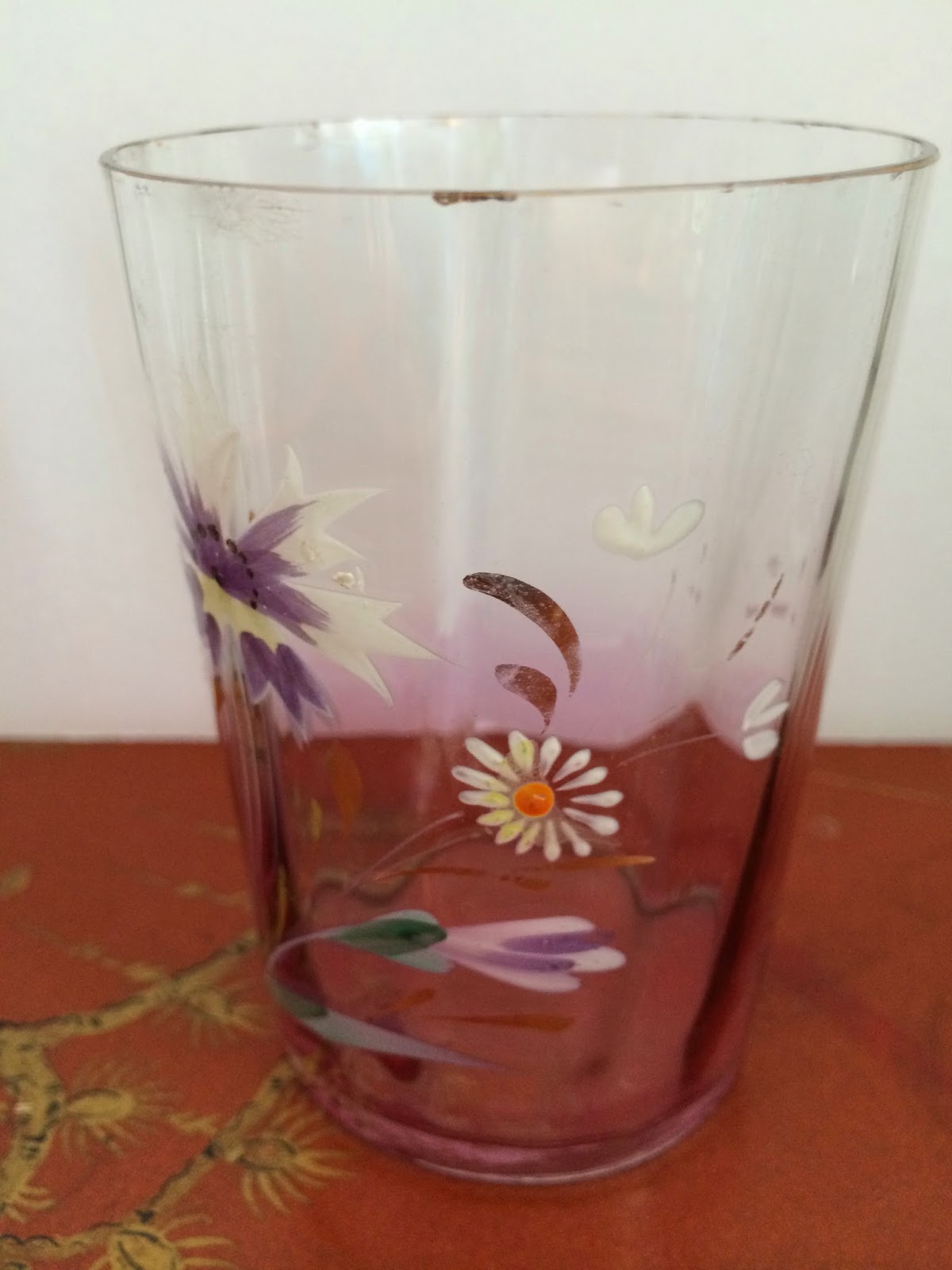 Some estate sales can be utter mayhem and this one definitely was! 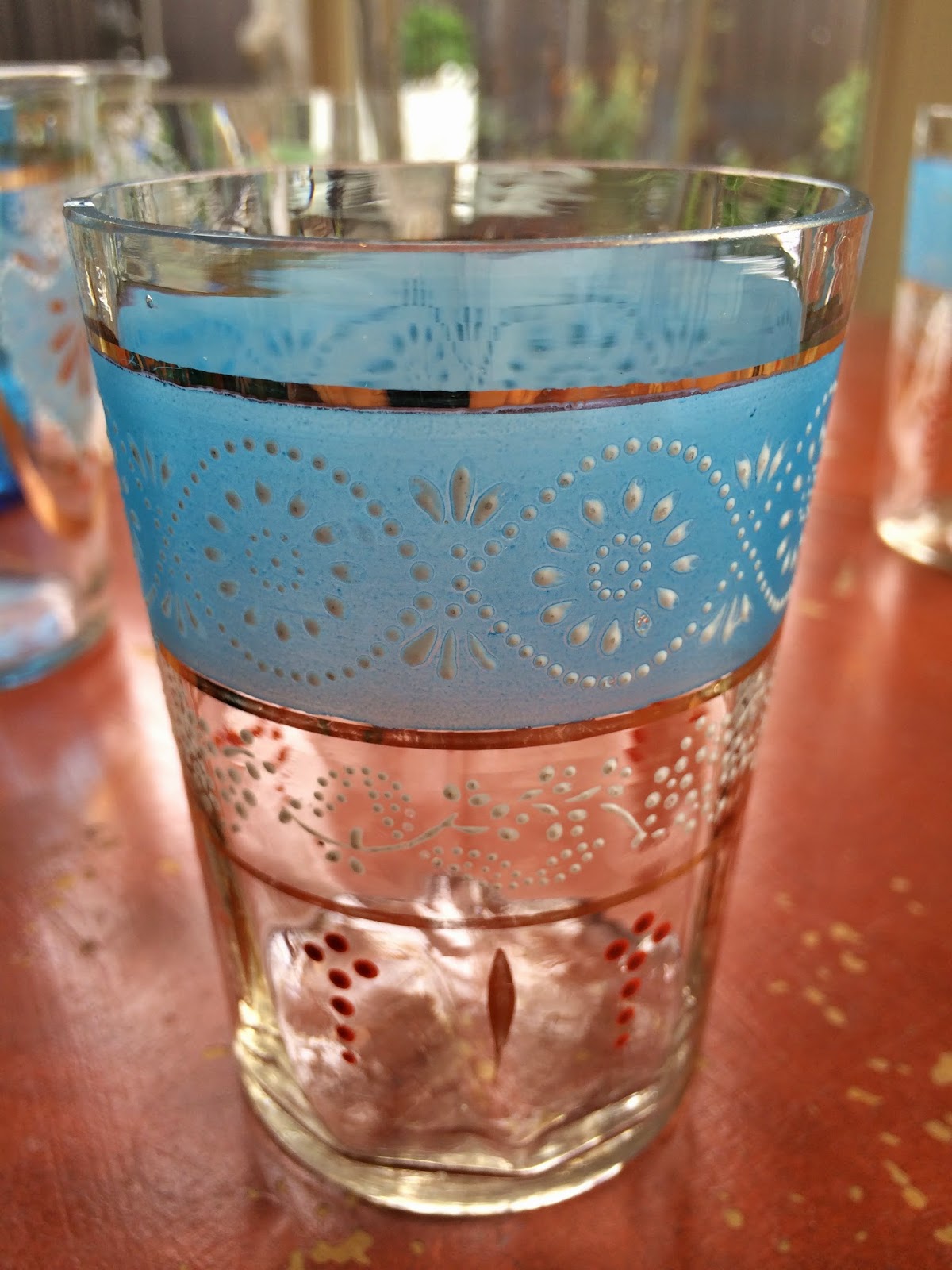 I just adore them but don't really know too much about them. 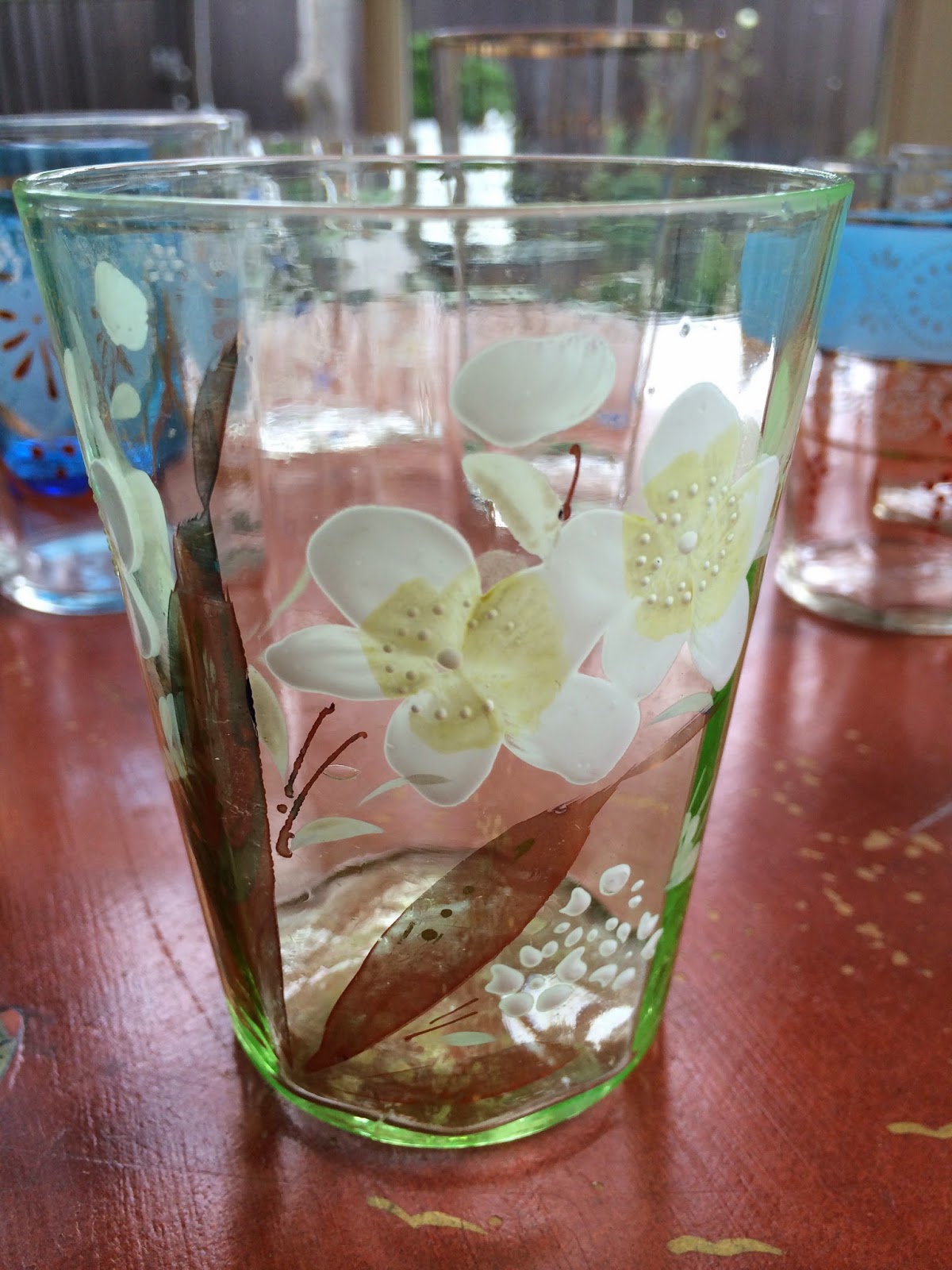 A friend told me they were German which would make sense since one of them has something written on it in German. 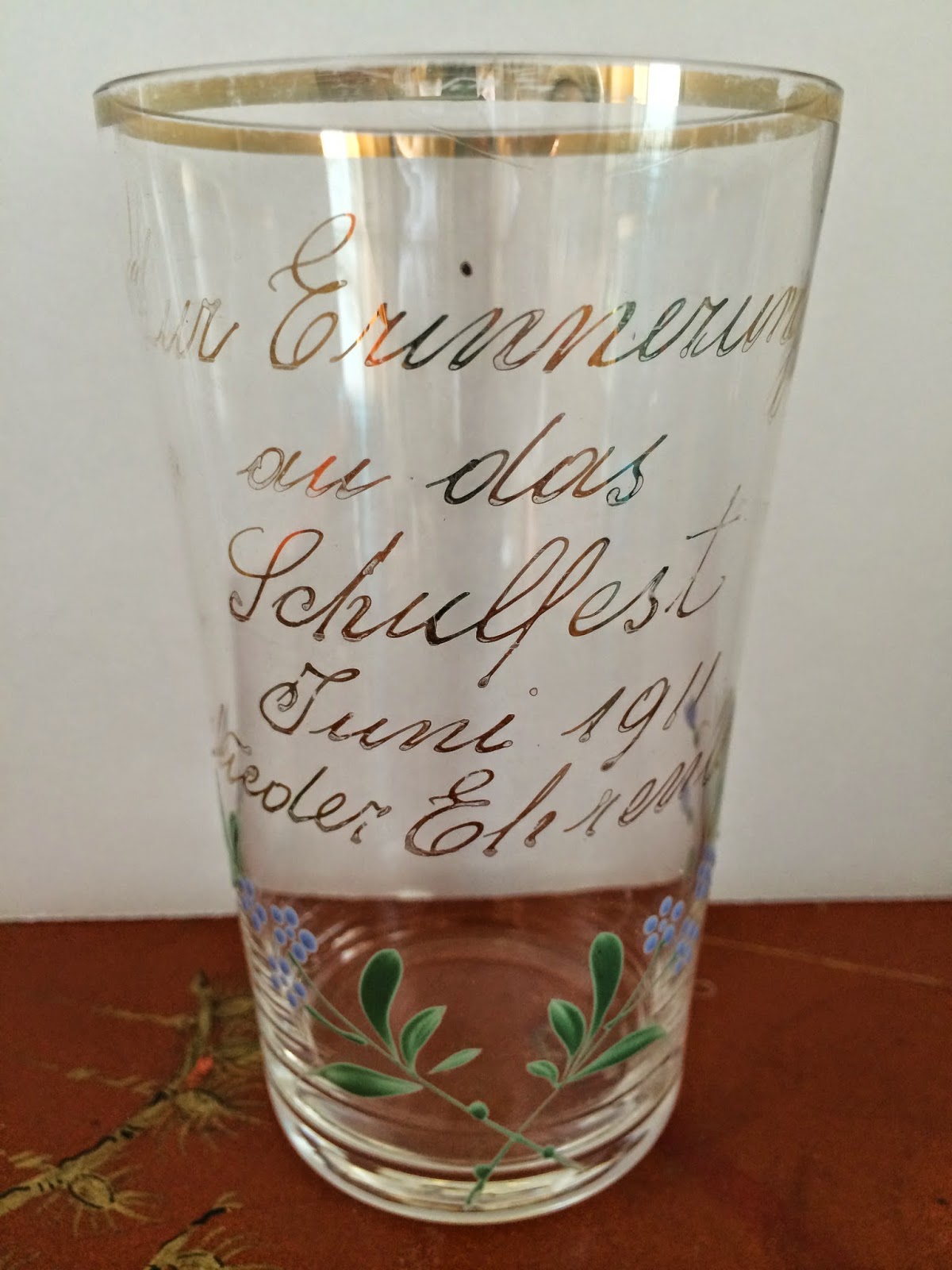 My first instinct though was that they might be French. 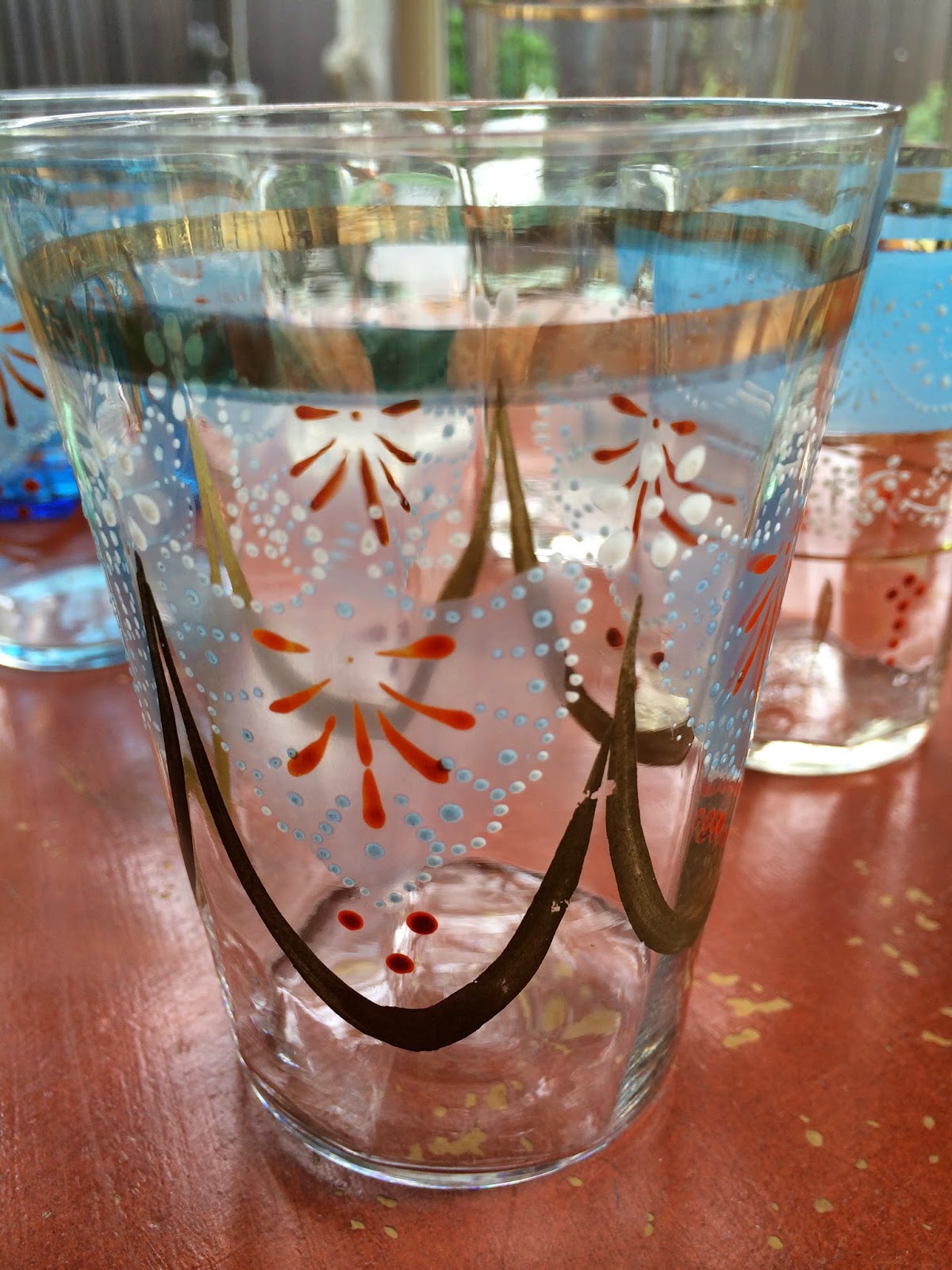 I found the following information while doing some research... 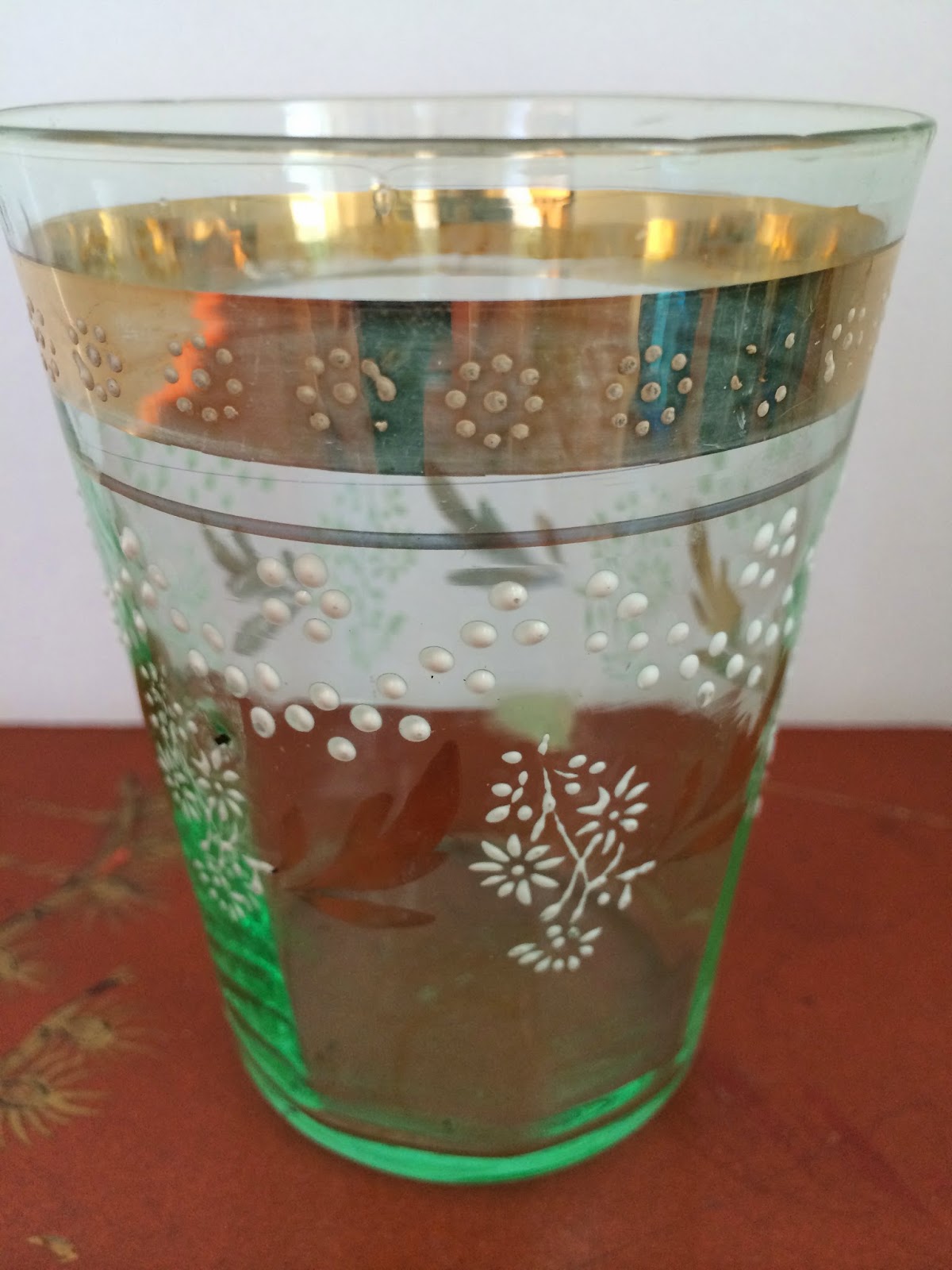 "Antique Glass Carafe & Tumbler Sets, hand painted with beautiful gilt decorations and  enameled accenting were originally used by French innkeepers for guests. The carafes, filled with red wine, would be placed on the bed stand, with the glass acting as a lid to protect the contents of the decanter from dust. Such sets eventually evolved and became the Bonne Nuit, or "good night", as they were called, a requisite for any well-appointed 19th century home." 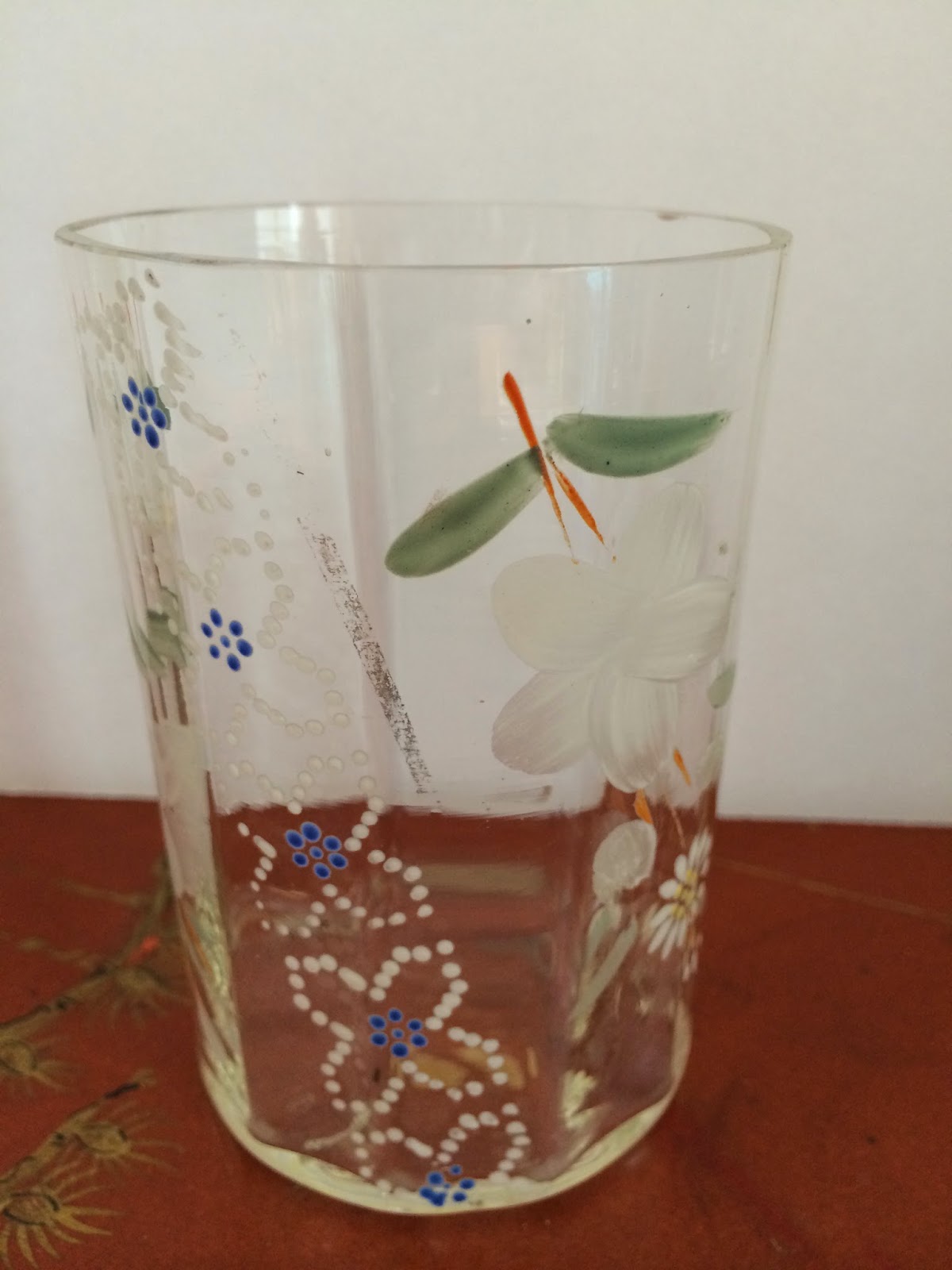 I've already used them once and look forward to using them often. 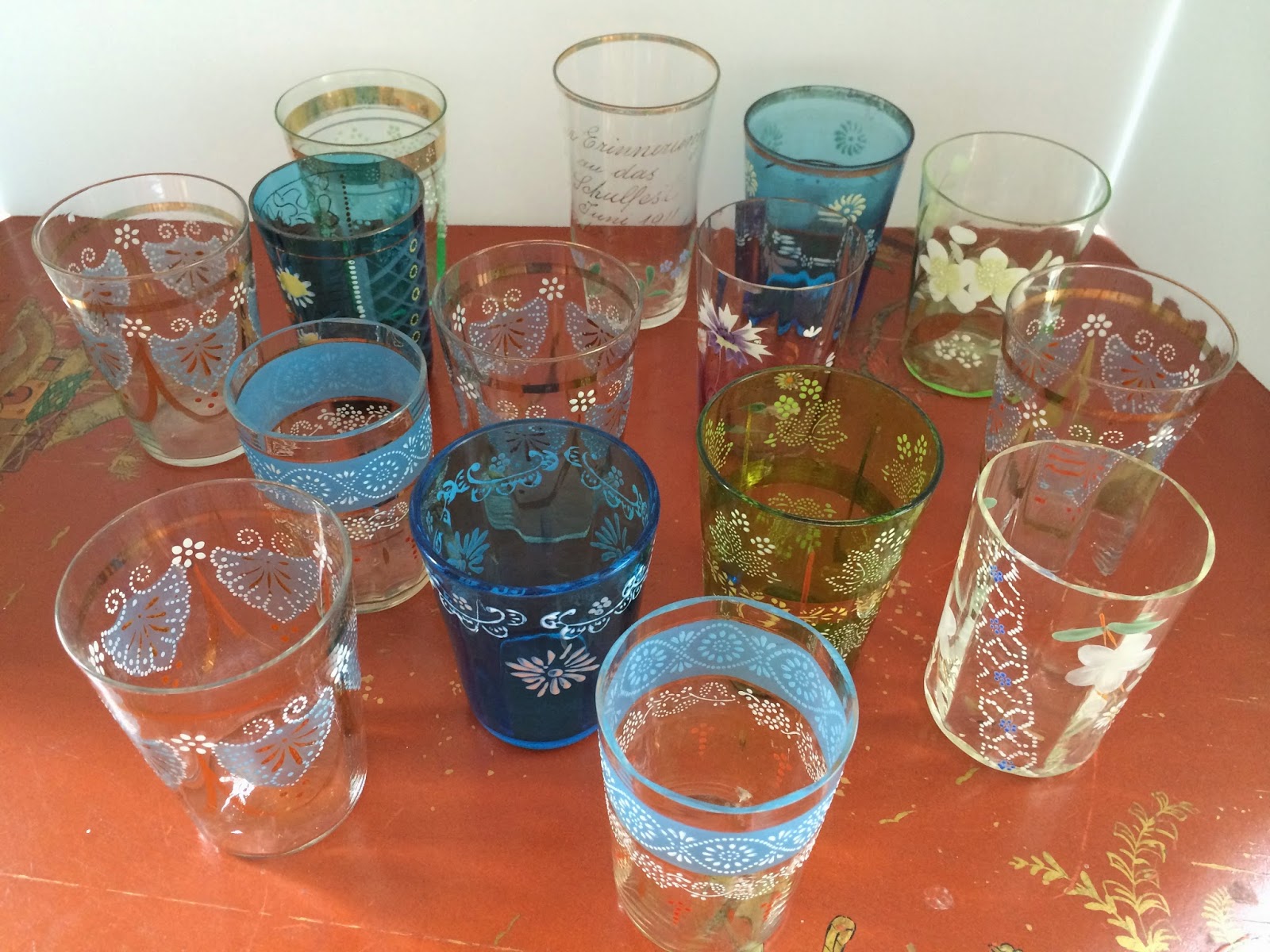 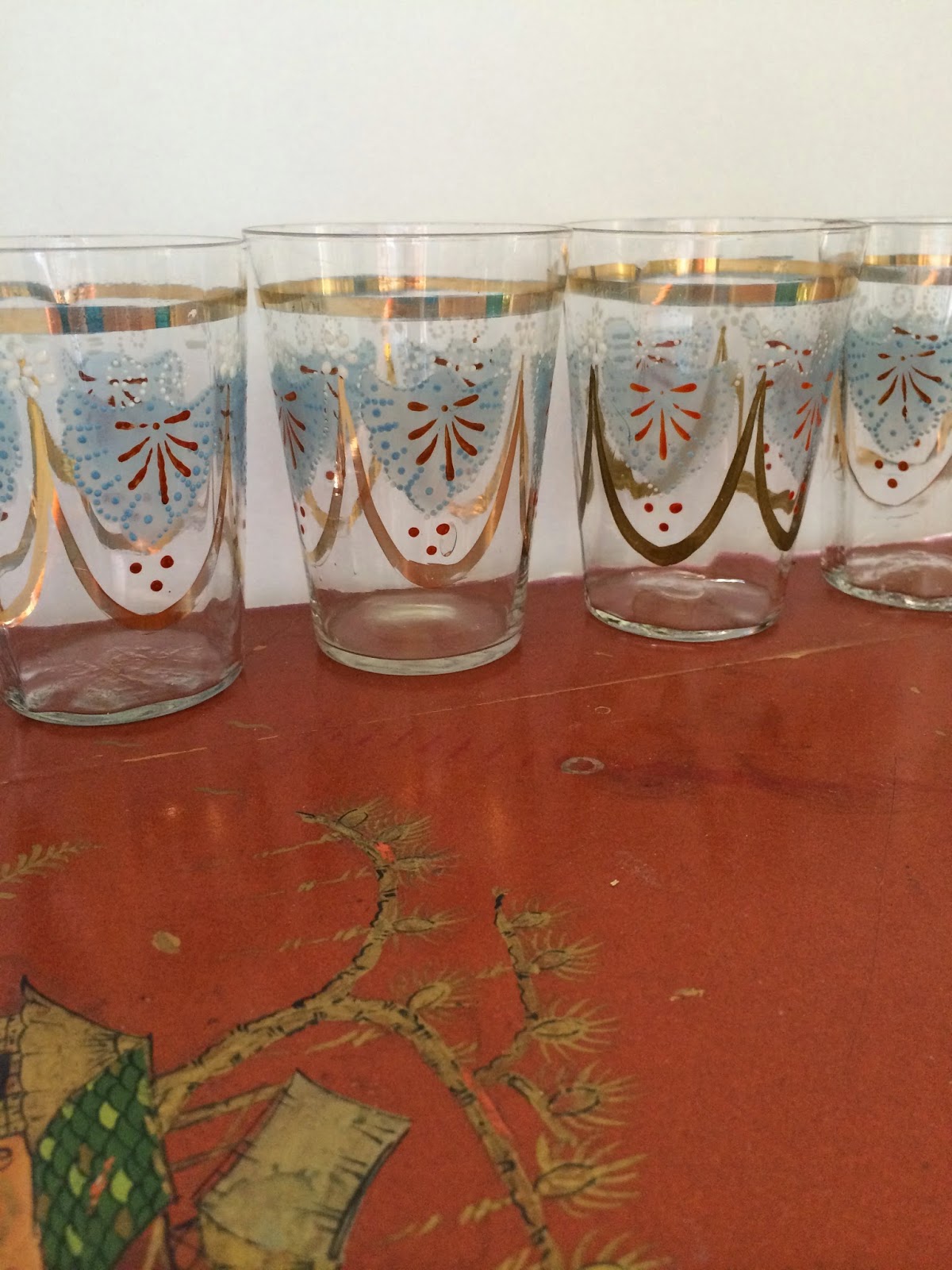 Seeing so many at one time made quite an impression! 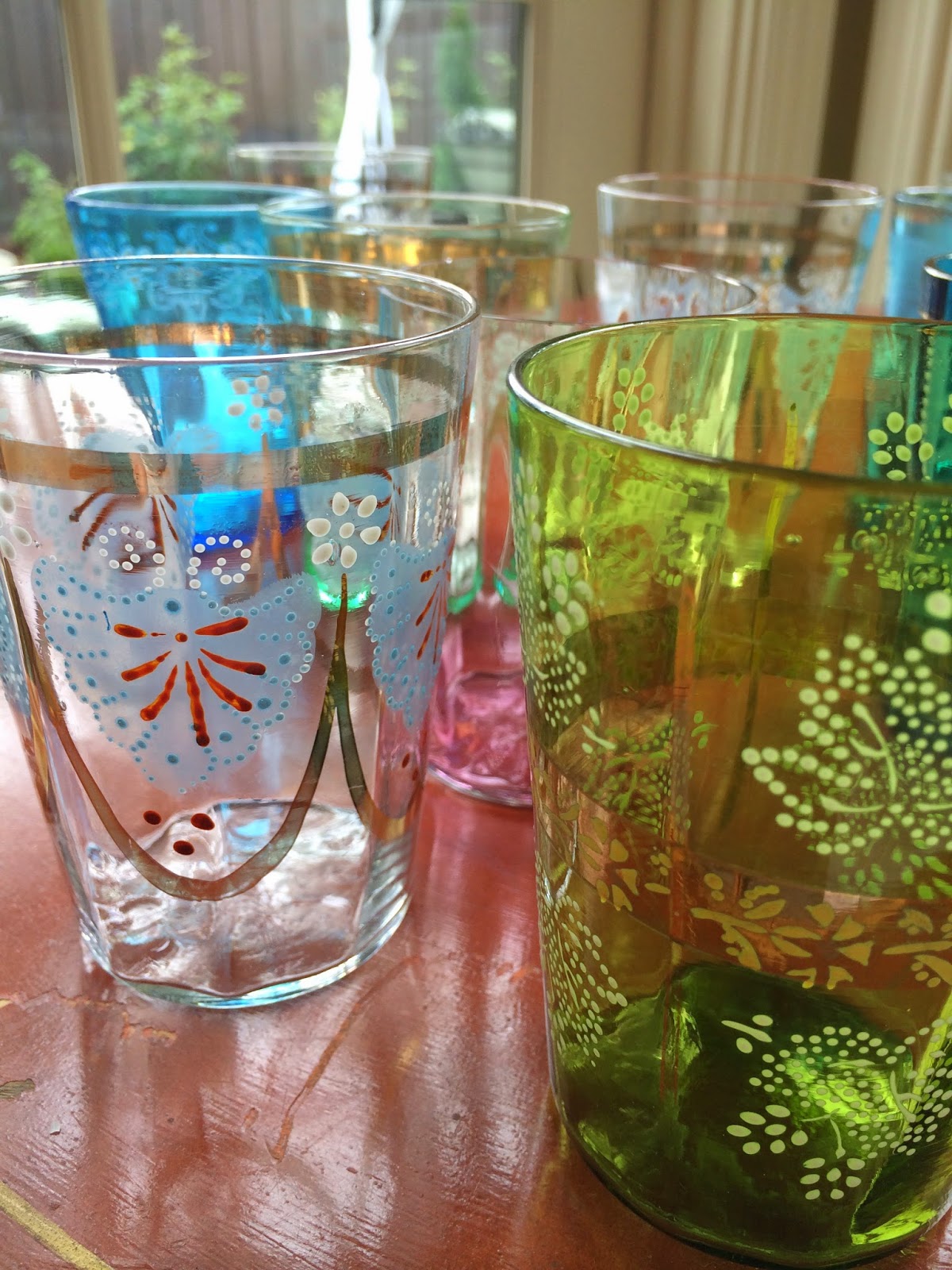 I don't know if I would have been quite so excited if there had been only one. 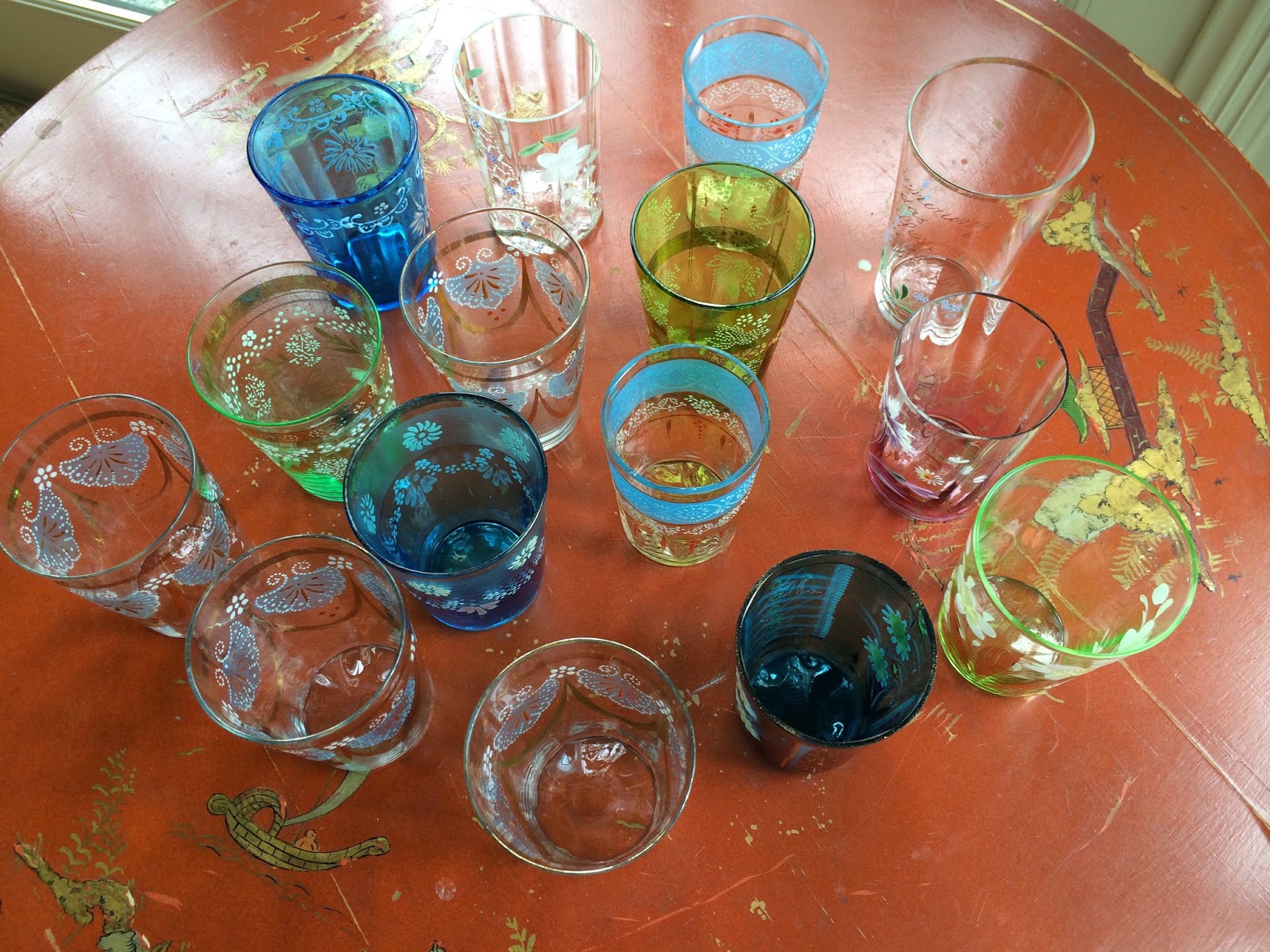 I'm curious... do you ever buy collections?

Terri this is a stunning collection of glasses. My sister Cynthia collects hand blown tumblers and glassware. Every one she has is different. I love the white with blue designs! Great score!

Hi Terri....good instincts when it came to you thinking French: loved your research and the beautiful glasses. I love collections. The following are a few of mine: antique French documents, French ephemera, antique book marks, sea shells and beach glass from every beach to which I have been and books from the 1800s. There is always such joy when being able to add to my collections so, your excitement is well understood. J.

Jill so glad to know what you cherish! Please send me your address:)
XO

Hi Leslie... Love it when you pop by!
How's the house?
Xo

Karena you are such a dear to stop over here so often. I feel so blessed to be your friend! You are the best treasure of all and sparkle more brightly than any of these lovely glasses here!!!
Love you my friend!!!!

Sure would like to tag along on one of your treasure hunts sometime!! If you decide to sell these I have a client for you. She has several and I know would like more!!

Cindy - Awesome, thank you, I will think about and let you know :)
xo

Oh and you are definitely invited to tag along with my anytime!!!!

These are beautiful, Terri...French or German? I love an instant collection~ and I love to see the variation in this set....shop on!! xxooA