There is so much fall inspiration floating around blogland that I was encouraged to dress up my fireplace mantel for the cozy seasons ahead. 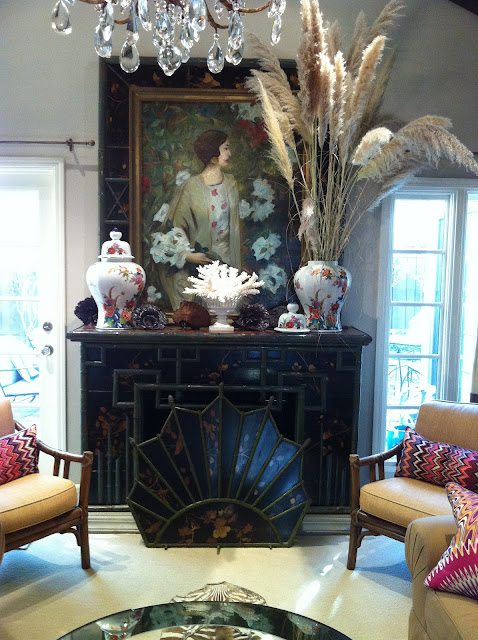 I have to admit that while I'm a huge fan of the fall season, I'm not especially fond of decorating my home in fall colors. 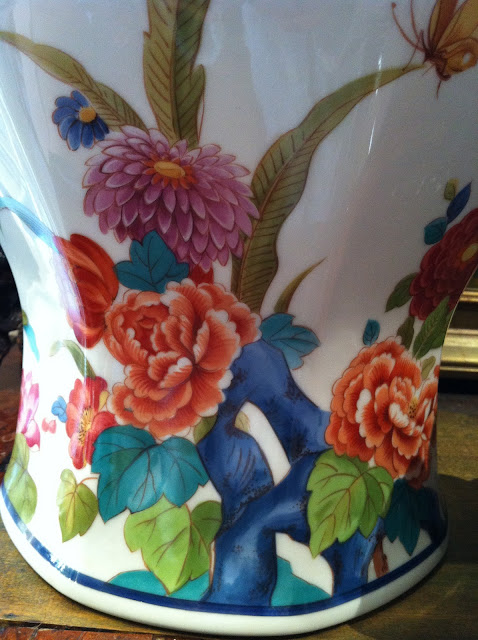 That was until...
I attended an auction earlier this week and purchased this pair of lovely large ginger jars. 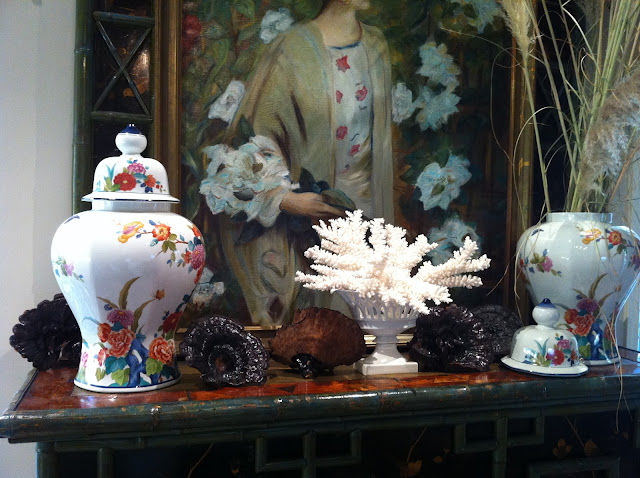 I brought them home immediately placing them on the mantel of my chinoiserie fireplace hoping they'd provide the drama I was looking for. 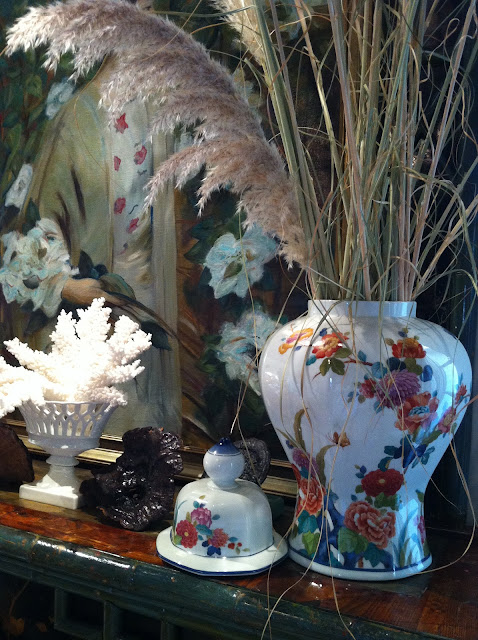 Now I don't know about you but I've always found mantels (and bookshelves) very challenging to decorate. 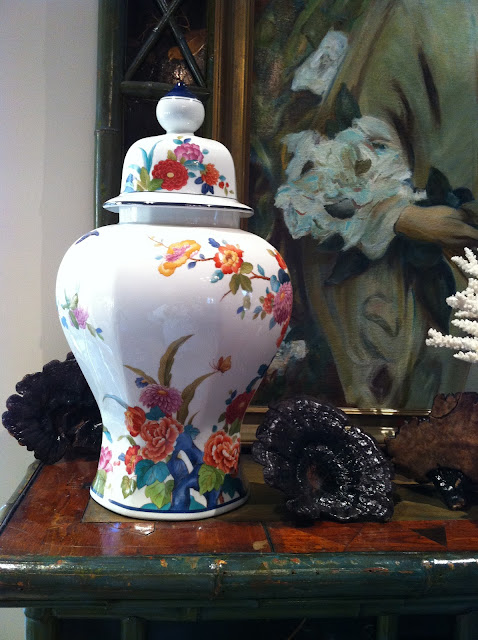 I stood back to take them in while scanning my inventory to see what I could come up with to create a pleasing vignette. 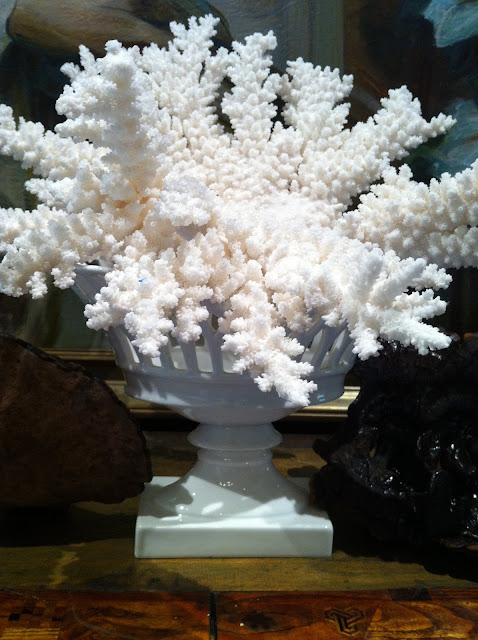 First I grabbed a pierced compote and a large piece of coral and placed it in the center. 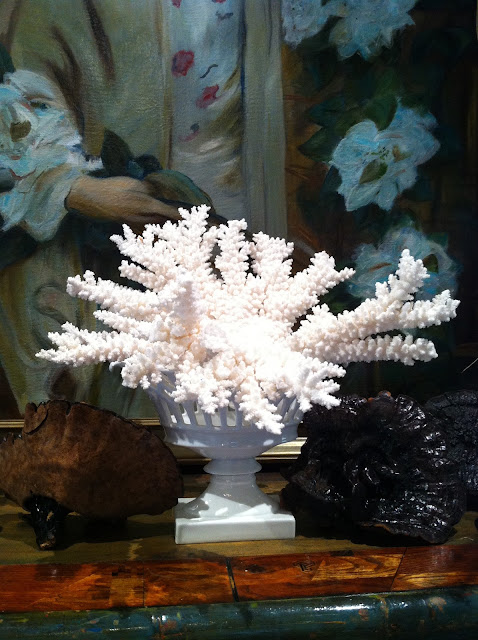 Then I remembered I had a stash of my favorite Chinese mushrooms which I then placed among the jars and coral centerpiece. 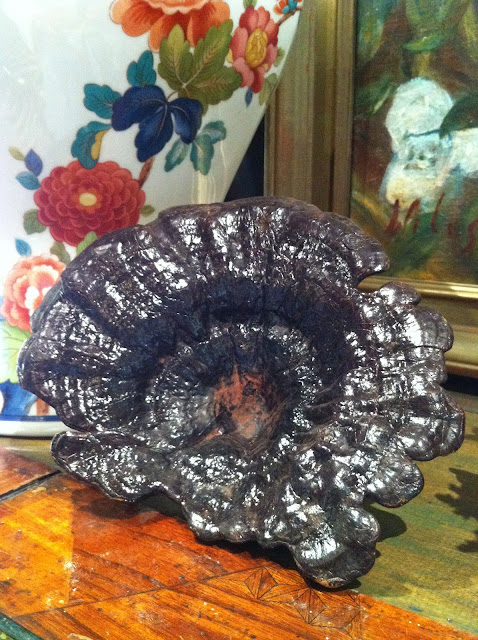 And finally I went outside to gather some pampas grass and placed it inside one of the ginger jars. I considered putting it in both jars but in the end decided that I liked the asymmetrical arrangement. 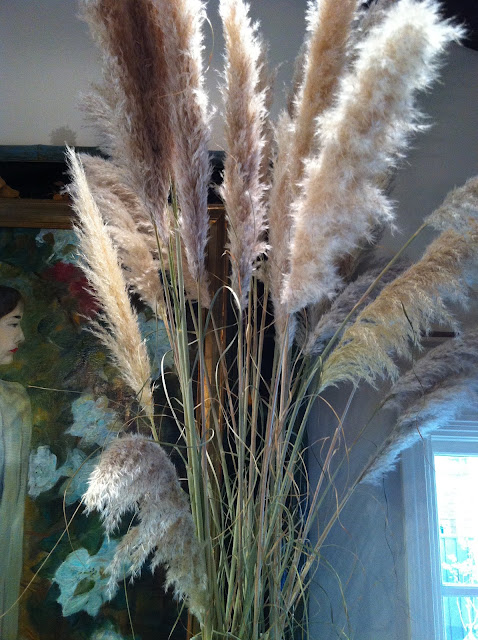 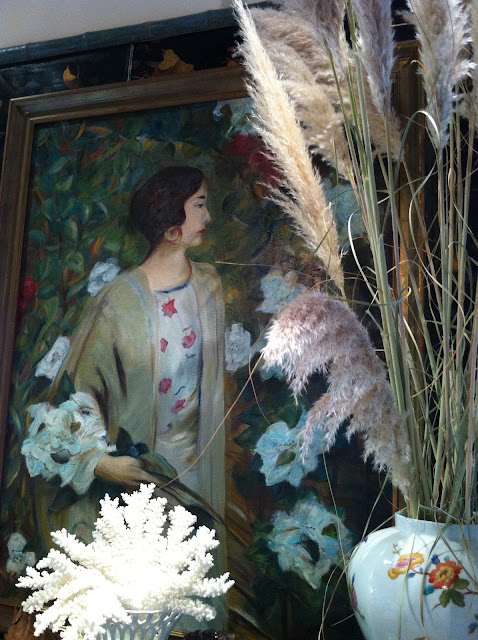 I spent a little more time trying to add a few other elements but realized that sometimes less is more and stopped. 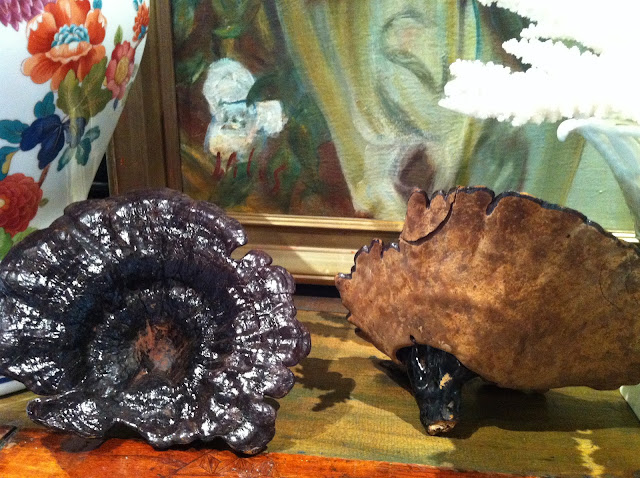 I placed the matching firescreen in front and voila... 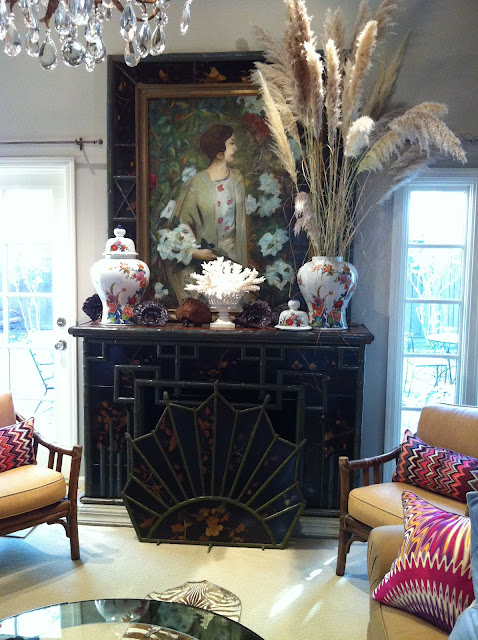 My autumn mantel was complete. 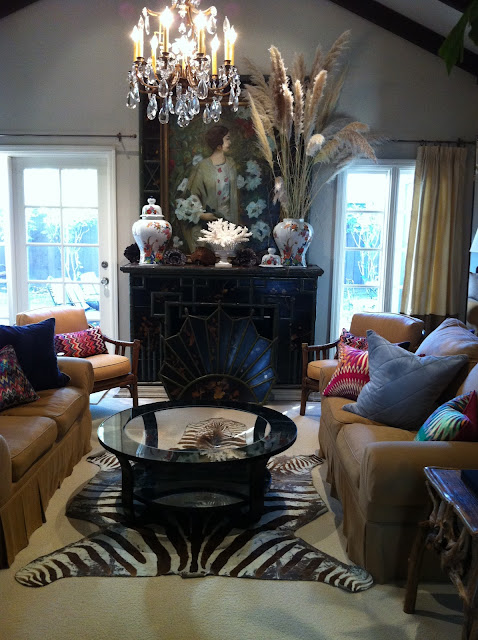 So, what do you think?
It's not the typical fall look but does it work?

I think it looks gorgeous.The ginger jars remind me of the lovely " Herend" china, with the same colouring.There is a " Herend"tea service in gren as well which is gorgeous, but I love the colours of this composition.

Oh Yes indeed!!! It works beautifully, the mushrooms took it to a whole other level, Perfection!!! So grand and beautiful, great job Miss Terri, xo Kathysue

It looks fantastic! Those jars are really beautiful, what a great find for you. The Chinese mushrooms add such an earthy touch. Love it.

for the love of a house said...

beautiful!! and I adore your fireplace screen!

Well done here! The jars compliment your lady in the painting's dress perfect and the whole vignette is really magazine worthy..Colx

Your mantle gets full marks. I love the scale and variety of shapes. You are a true artist.

I am pleasantly surprised. The pampas grass is unexpected and a very bold and beautiful statement. Would you come over and decorate my mantel next?

Love the painting such a grand and beautiful statement piece, love all that you brought to your beautiful display of fall.
The mushrooms are amazing :)

How is your beautiful shop doing "Terri"

Everything is working just beautifully! and I love asymmetrical.

Your house looks beautiful! The mantel is creative and perfect for fall. Love your painting, so interesting.

Beautiful! The jars are fabulous, as is the FP itself.

It is PERFECT. Just the right amount of beauty, color, drama, height...and you nailed it. I love it!! Gorgeous ginger jars and the white piece of coral adds a great stark contrast in the center..beautiful!

i think you are a GENIUS! thought at first it was an inspiration snap from 'world of interiors' or something then realized it was your home.....bravo!
debra

I agree with everyone, it looks spectacular! great job.

P.S. did you ever show your home on HGTV rate my space? Your living room looks very similar to one I remembered seeing years ago. The home also had a fabulous outdoor space with a Zgallerie canopy that inspired me to get one for myself.

Terri I adore it, your fireplace and mantle are so glorious! The ginger jars, what a coup!I love the coral and the painting as well.

I would love your thoughts on my Autumn decor so far, oh and I will have a new giveaway!

Hi Theresa...your mantle is beautiful and the new vases are perfect for the parisian chinoiserie!

Love the ginger jars - especially the colors. Definitely perfect for decorating in fall colors without turning into a Jack-O-Lantern :) Beautiful!

well, throw some coral in the mix and I am your girl! It almost has a curiosity cabinet feel to it. Love it!

ABSOLUTELY STUNNING. I still think you have one of the most striking living rooms I've seen.
:)