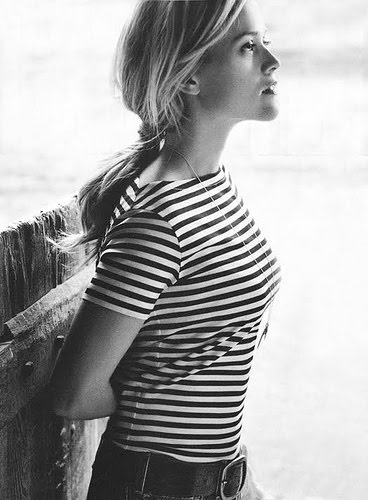 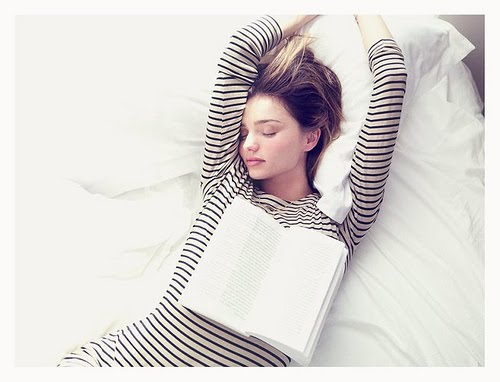 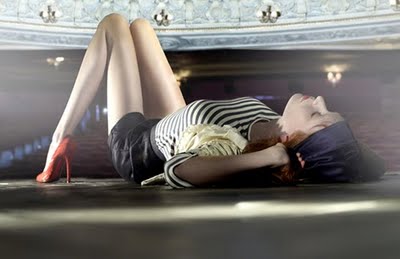 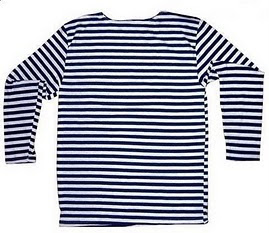 The Breton shirt, was created officially by French law, the 27th of March 1858 Act, which made the blue-and-white striped knitted shirt part of the regulatory uniform for French sailors.

It was thought that the stripes would help to locate seamen who fell overboard. 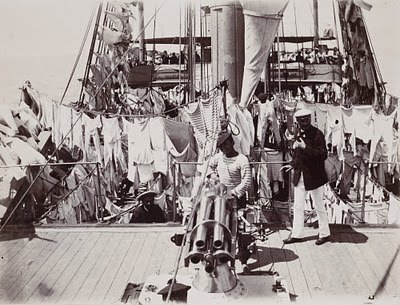 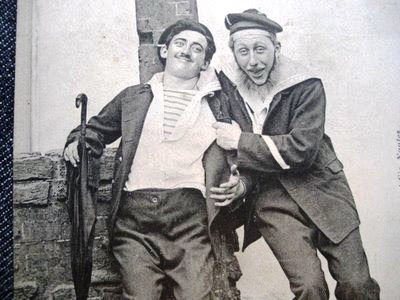 The original shirt featured 21 stripes, one for each of Napoleon's victories.  Not only did this shirt become the standard of the French (merchant) navy and fishing fleets, it was soon exported to other navies around the world and became big as a fashion item a century after. 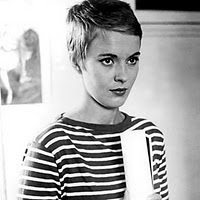 In the late 1950s and '60s, the shirt was associated with French New Wave cinema - girls with gamine looks like Jean Seberg in "Breathless" and Jeanne Moreau in "Jules et Jim."

Coco Chanel first elevated the humble striped top to style status.  In the 1930s she designed and wore a striped mariniere with palazzo pants - a look adopted from French sailors.

Since then many designers and style setters have followed suit, Brigitte Bardot was a fan, wearing hers barefoot and pouting on a breezy beach. 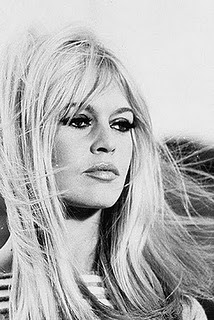 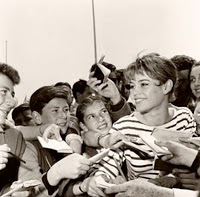 It didn't go for women only, it's a sailor's garment after all.
For men they offer a sense of tradition, honest labor and virility. 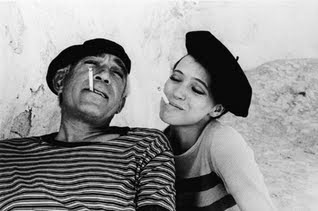 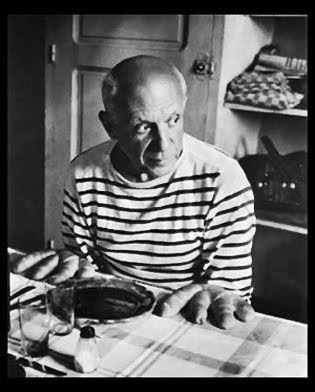 'Picasso and the loaves'
by Robert Doisneau 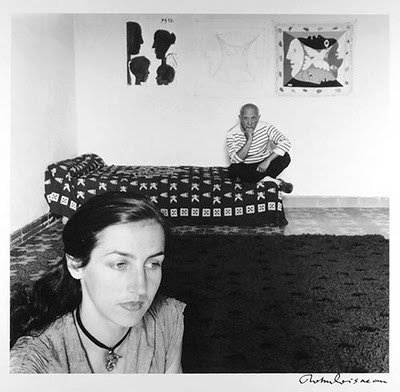 'The Master with Francoise Gilot

Here's a look at stars from past to present who have worn the look.
Click here to view video. 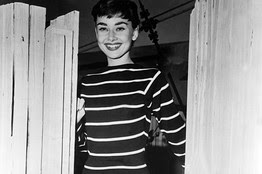 *All text and images from here
Please join me over at Il Tuo Tesoro for a sip of pastis!
Posted by La Dolfina at 5:20 PM

All of a sudden I feel I must have one! Even with some of my favo's - James Dean and Audrey H., still the image I can't get over is that ship with all the darn laundry hanging all over it. Sometimes my laundry room feels like that!

Wow, what fun! I knew I liked the look but never thought about the history behind it!! xo

Fab and is a must have wardrobe staple in my book.

Well, T, you knocked the ball way out of the park with this post. Just fabulous! I never knew any of this. So interesting. And, I'm sure every one of us has a couple of this type shirt, I know I do, and I wear them all the time. xx's

What a great post - so interesting. I have quite a few striped t's that I have bought over the years.

I have always wanted one - and a Bachi.

I love learning the history behind things! I love the nautical look but have a hard time wearing it myself because I feel like a walking cliche being a Navy wife and all.

I have loved this look for as long as I can remember, but somehow can't pull it off myself. I have tried on countless striped sailor shirts only to leave them behind because they were just too strong of a pattern?? on me. Thank you for sharing the history and finding so many great images! And thanks again for your comment today--I hope you get to go there soon.

It's certainly a classic ;)

Such a great post... We loved all the classic photos!!

What is it about this iconic look that is so chic and appealing to me? Love those Breton stripes, even though they really don't flatter me so much, its a real fave of mine as well.

I love the research you have done! It's always so interesting to find the history of something.
I have always loved and found this look so appealing. So interesting. Thank you.

It's fun to read the history here. I've got a couple of versions in my closet and even admit to buying one shirt in a maternity version as I am due in October. Not sure of those horizontal stripes and a 6 month pregnant belly are a "don't" or not but I still like the shirt!

Love the shirt! So timely, as we will be sailing next weekend!

Time to shop for stripes! Beautiful post. Thanks for sharing. James Dean looks incredibly gorgeous in that striped shirt, btw.

I actually just bought one by calvin klein...though mine is with a few buttons and a hoodie.

Talk about a classic! Striped knitted tee shirts are a stable for me.

Oh I am with you on the striped shirts ! STILL cannot find one that fits me right. I will keep looking ! Did you go to the Candlestick show today ?? Hope to see you at the next Alameda ! XO

Oh, Terri! You got me on this one. You know stripes, especially in blue and white and on clothes, are my TOTAL fave! Fun reading the background...thank you! Hope you had a darling weekend. xo

i love stripes! i wear them and i dress my boys in them. i had no idea of the history of them though. french? i think i love them even more now! ;)
kathi

Terri - love this look! And in fact, I bought my son the cutest St James sailor shirt from J. Crew --- only to walk by the St James store in Paris where they are made! Ships Ahoy! xoxo Elizabeth

What a fun post, I've always loved these shirts! Now, if I could just look like Briget in one!!
xo,
Debra

How about that James Dean..wow. I adore the photo of Anthony Quinn & Anna Karina. I remember him well wearing a sailor shirt in his hay-day. I own two & love to wear it riding my motorcycle. Must be me channeling ole' James Dean. Such a tremendous post & great fun to watch the video Terri. Many thanks! xxoo deb

I loved striped knit tops. And I love Chanel for making them so chic. What a great post!

This post was so neat! Can't get over all the pics--so, so great! Yes, I feel like I must have one of these now--thanks for that :)

Luv, luv, luv, this shirt...always have. It is soooo French. You have made me want to run out and buy one for my September trip to Paris, Istanbul and Mykonos. Yes I must have one...lol
Thank you for a most wonderful post.

Great post! I love the sailor shirt, had one once, the knitted kind..., maybe I even bought it in France -too long ago! But I did not know that it was regulatory uniform for sailors.

love the shirts, never knew the history-thanks for the great story!

Thanks for the history on my favorite striped shirt! So lovely to hear the back story!

How did I almost miss this great post??? I love the striped sailor shirt, one of my staples for the summer!
Hope you are having a wonderful week, my friend!

So cool. Pulling mine out now! Love all the photo's!

Funny, I've got
my eye on a really
cute striped top
at Madewell.com,
which is J.Crew's
new store. Love
the history lesson
and the wonderful
photos! Hope
you are enjoying
the week : )
xx Suzanne

Oh, the history behind this is so interesting..... I had no idea of all the symbolism and the reasons behind it! What an interesting post of course dear friend!

I loved this post Terri. Such great images! Thanks for sharing.

Love this Therese
Just saw the link on Maya's blog... One of your lovely posts I missed whilst fighting the internet battle....