While visiting one of my favorite blogs, Everton Terrace, I was blown away to discover that the Popsicle was invented in my hometown! 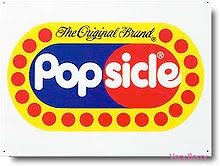 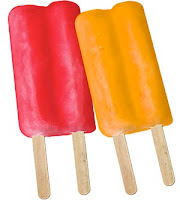 "Once upon a time people danced on the stage, lounged on the beach and swam in the pool.  They awed at champion swimmers like Johnny Weissmuller and muscle bound men like Jack LaLane.  They rode on the hand-carved carousel and screamed while aboard the roller coaster as it dipped and rose and dipped again."


Once upon a time at Neptune Beach. 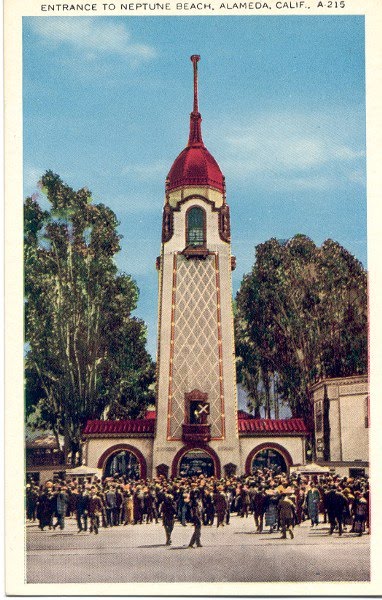 "In 1905, Frank Epperson, then only 11 years old, left a stir stick in a mixture of powdered flavored soda and water out on the porch.  That night, temperatures in San Francisco reached a record low.  When Epperson woke the next morning, he discovered the drink had frozen to the stir stick, creating a fruit flavored 'icicle', a treat he had named the Episicle." 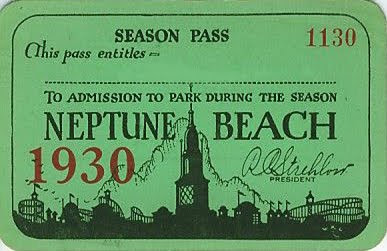 "He then waited 18 years before releasing it to the public.  In 1922, the ice-lollipop was introduced to the public for the first time at an Alameda, California amusement park, Neptune Beach." 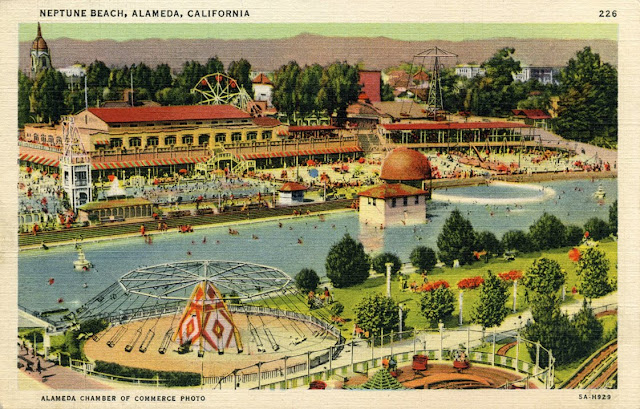 "In 1924, Frank Epperson applied for a patent for "frozen confectionary" called the Episicle ice pop, which he renamed the Popsicle, allegedly at the instigation of his children." 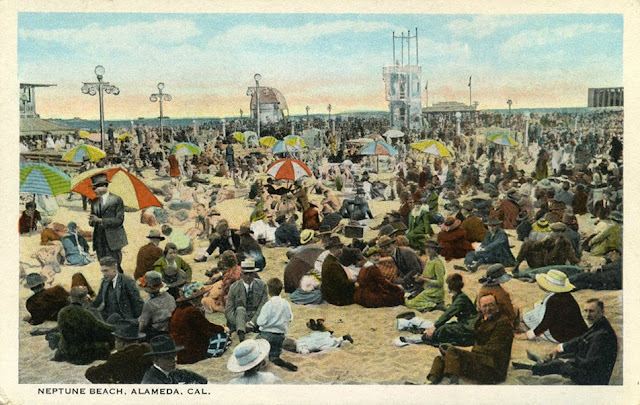 "Neptune Beach opened in 1917 - three years before the Twenties began to roar.  Admission was just a dime, although most everyone knew that you could swim into the park for free." 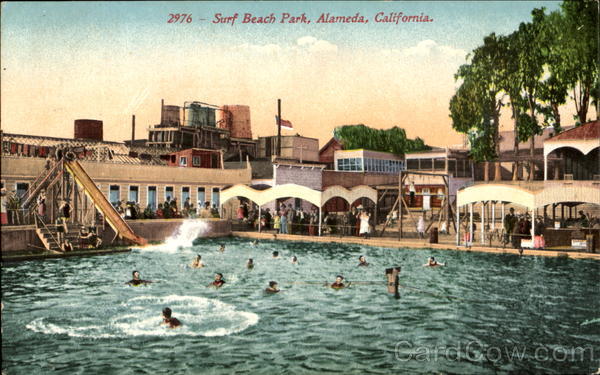 "Neptune Beach closed down for good in 1939.  Some blamed the Great Depression for the park's demise, although the Bay Bridge, which opened three years earlier, was the more likely culprit.  The same people who danced and lounged and swam at Neptune Beach could now go further afield - even to the Pacific Ocean - without leaving their cars." 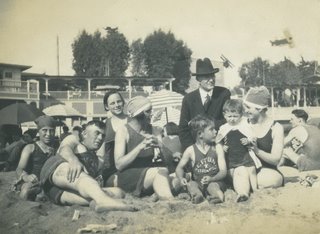 "Though many do not know it, both the Popsicle and the snow cone were invented at Neptune Beach.  The Kewpie doll, hand painted and dressed in unique hand sewn dresses, became the original prize for winning games at the beach - another Neptune Beach invention!"

I do believe I was born in the wrong century ...

hey honey, I have some beautiful shells you might want!

What a delight to see my blog mentioned when I opened up to read yours today - thanks!

I LOVE old postcards and ephemera. I've never been to Neptune Beach - does anything from that orignal glory remain? Looks so charming.

I'm with Momma (Cityfarmer) on this one.
Those old postcards thrill me... and Marty cracked me up!!!!

Fantastic bit of history! Hey are you back?

So much fun to discover things about your hometown. I like to go on Wikipedia and look up towns I've lived in or been to. There's always a list of notable people who are from there. So surprising. Looks like you're having a fun summer!
Catherine

Terri that is so interesting, Who Knew?? Neptune Beach looked so fun in its hay-day!! Hope your are having a good time relaxing!! hugs Kathysue

I love this post Terri! I didn't know about Neptune Beach. Now I'm so curious. Love the old postcards. Now when I eat a Popsicle, I will think of the good ole days at Neptune Beach. It must have been wonderful.
Hope you are enjoying Tahoe.

How cool is that?! Sounds like you live in a great place w/ lots of history!! xoxo

Thank you for this - I loved it! Those postcards are fantastic!

What a fun post. I enjoyed the history. Is anything still standing to show the place was ever there?

I'm really just a big kid - because I LOVE popsicles! How cool they were invented in your town. The scenes of Neptune Beach remind me of our little Playland in Rye. It was the sight of the scenes in the movie, BIG, when Tom Hanks plays the carnival game that grants him his wish. xo Elizabeth

How cool is that?! I'll have to show this to my kids! As for the posts in the pot- I came up with it out of necessity. She owns a townhome and is unable to attach anything to the fence. I really wanted to have the lights drape across the yard so I decided to use the posts. The job is coming along ok. A LOT of stuff to learn. The kids are doing better than I thought they would so that makes it easier to be gone all day. Thank you so much for asking ;)

This is such an interesting post and where did you get all the great photo's. Thank you for all the time you put into this post I enjoyed it. yvonne

What a marvelous post Terri. Can you imagine being part of this California past. I can just picture you & I riding the 'whoopee' roller coaster! I so enjoyed the video & the charming tales of the sweet man with his magnificent mustache. It is amazing the size of Neptune Beach. Thanks for sharing this; I love history and I love California ( & you too of course!). Sorry I've been such a bad blogger..have been missing you xx

I love this post! The picture postcards are fabulous and the history wonderful. I had no idea of this story. You have enlightened us!
I will think of you and Neptune Beach every time I enjoy a Popsicle! Fascinating! Thank you.

What a great post! Don't you just love learning something new, especially about your hometown! I'll always remember this when I eat Popsicles from now on! Great postcards btw! : )

fabulous post... i am going to buy a box tomorrow... sounds so good.. have not had one in YEARS! hope you are truly enjoying every bit of summer...xx pam

Thanks for posting this. It is so interesting. Having lived in Alameda, I never heard anyone talk about Neptune. What is on the land now? What would the closest street today be to where it was? Also didn't know about the Popsicle. Must have been an unusual year as I don't remember it freezing.

How amazing to have come up with such an amazing invention and wait for 18 years to talk about it!
The man needed a blog!
Sharon

Wow, how cool is that? The popsicle and the Kewpie doll! Love the vintage postcards!!

That is so "cool" :) Next time, and every time we have popsicles around here (which is quite often) I will think of you!

Wow that's so cool!!!!
Who doesn't love popsicles....now whenever I have one i'll be thinking of you:)

Terri, what a
COOL discovery!!!
Love the vintage
tale told through
the great old postcards.
You do, indeed, hail
from a very cool place!
xx Suzanne

Too cool...
Delightful post, loved the walk down memory lane with you.

Oh, the grandeur of old amusement parks! Life had to be much simpler then!
Theresa