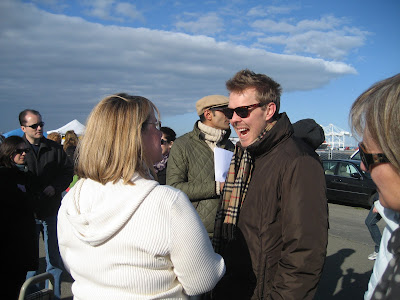 Eddie Ross wrapped up his year of touring some of the country's best flea markets this past Sunday at our very own Alameda Point Antiques and Collectibles Faire. I think it was perhaps the coldest day in the Bay Area to date but it did not damper the spirits of the loyal following that assembled to meet Eddie and learn his secrets of navigating the market to find the best treasures. 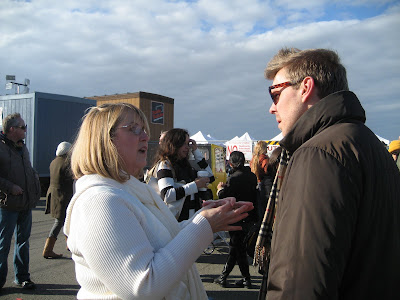 Here he is meeting one of his all time favorite readers, Kathysue, who braved the frigid weather to come and meet her favorite stylist and blogger! 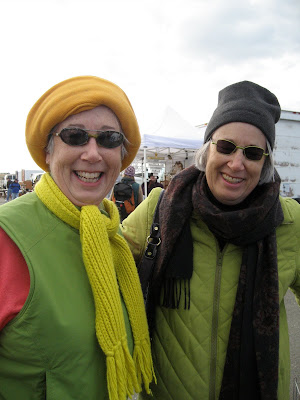 These sisters were dressed to kill! How cute are they? 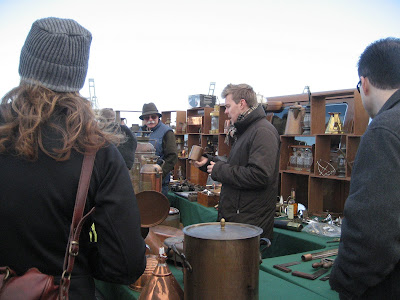 Eddie was amazing, and it was such a treat to be able to listen to him as he described what to look for in terms of markings and age as well as the many ways in which it could be used. No wonder he's the man when it comes to styling. His imagination is endless with possibilities! 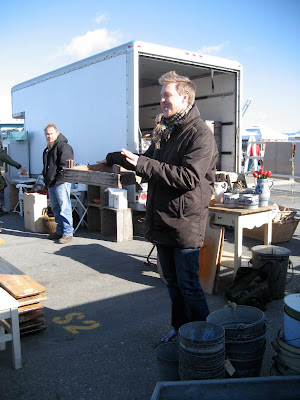 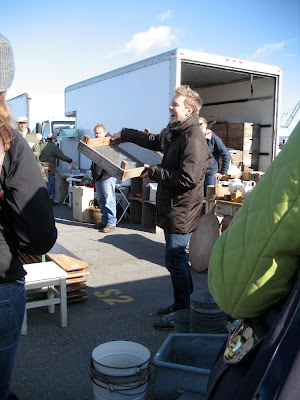 He was so entertaining and funny! Believe it or not, he's even more adorable in real life! 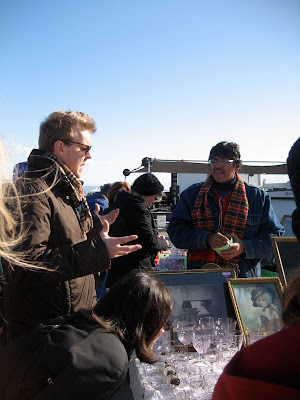 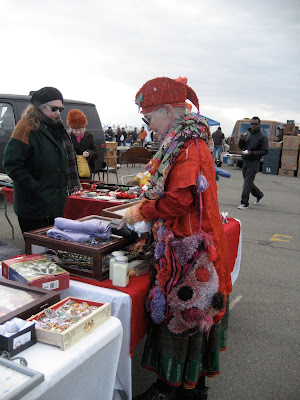 She missed out on the tour...unfortunately she didn't sign up in time :-) 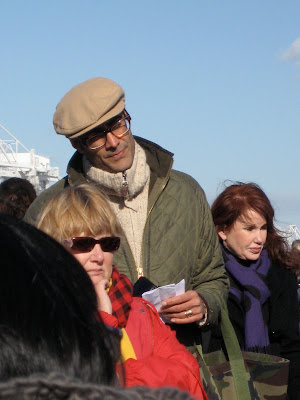 Jaithan is still interested in what Eddie has to say even after an entire year of touring flea markets across the country. 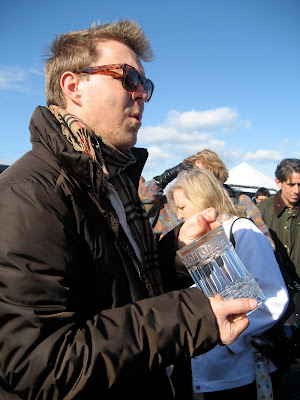 This was one of the best moments, when he spied something he couldn't resist... 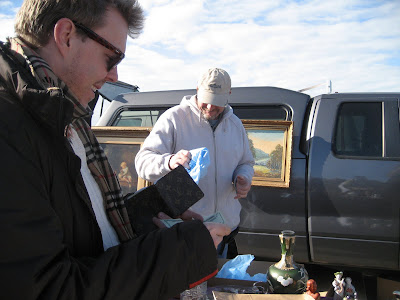 He whipped out his wallet right then and there and paid for his treasures...2 pieces of Heisey glass with the Greek Key motif. Does he look victorious or what? Apparently it's one of his most beloved collections.

(I will add Steven Small's photo gallery of this months bounty of treasures later this afternoon)
Posted by La Dolfina at 2:29 AM

Looks like SO much fun. I would of certainly thrown on my woolies to have gone flea'ing with Eddie. Thank you for sharing your great day & photos with all of us. Cheers!

Hi Terri,
You are just The BEST!!! Jaithan and I love you and your family!!! Thank you for all that you have done for us and Thank you for such a sweet post! We love you!!!!! xooxox
E&J

You are truly a gem! Loved getting to know you and can't wait to see you again soon!

Confessions of a Plate Addict said...

Oh, how fun! And I loved seeing my dear friend from RMS...Kathysue! You are so lucky to get to hang out with her, too! It looks like everyone really enjoyed it...frigid weather and all! Thanks for letting us come along!...Debbie

Hi Terri, How fun it is to see our wonderful Day with Eddie and Jaithan through your eyes and wonderful words.It was such a highlight in my life to meet Eddie and Jaithan,they were both the most endearing young men I have met in a long time, and then on top of that I got to meet you, Terri!!! I am looking forward to some new adventures with you. I think the journey we are about to have is going to be amazing, Hugs Kathysue

Hi Terri! I came over on recommendation from Kathysue and I'm so glad I did. I loved looking through your posts, and of course I just love this one. Isn't Kathysue just the best? Looks like you had a wonderful day, what an exciting event. Kathy

Terri, thank you for sharing the pics and your narratives, they're wonderful. And I can't wait for more! Sounds as if Eddie and Jaithan thoroughly enjoyed themselves and your great hospitality and ever present sweetness!

How fabulous to meet Eddie & Jaithan. I would love to tour these markets too! Ax

Jean and I just found this photo of the two of us on your blog- thanks for posting it- in spite of the cold and the wind we had a blast that day! Eddie and Jaithan were terrific- Emily M

Thanks for posting this photo of my sister and me. It reminds me again of how much we enjoyed the day, being together, being with friends, and being with like-minded fans of Eddie. The weather be damned, we were dressed to chill!

Yay Terri- so exciting! I'm so happy to see a picture of Kathysue too!! :)